There’s no shortage of charming villages in France and while there are still many on my bucket list, I’ll never tire of Saint-Paul-de-Vence. Between the winding cobblestone streets, the remnants of some of the greatest artists and literary greats, and quaint restaurants with breathtaking views, Saint-Paul-de-Vence is worth venturing the short (and beautiful) drive on the winding roads if you’re visiting the South of France. Perched high on a hilltop, It just might arguably be one of the most beautiful villages in the Cote d’Azur…if not the entire country itself. 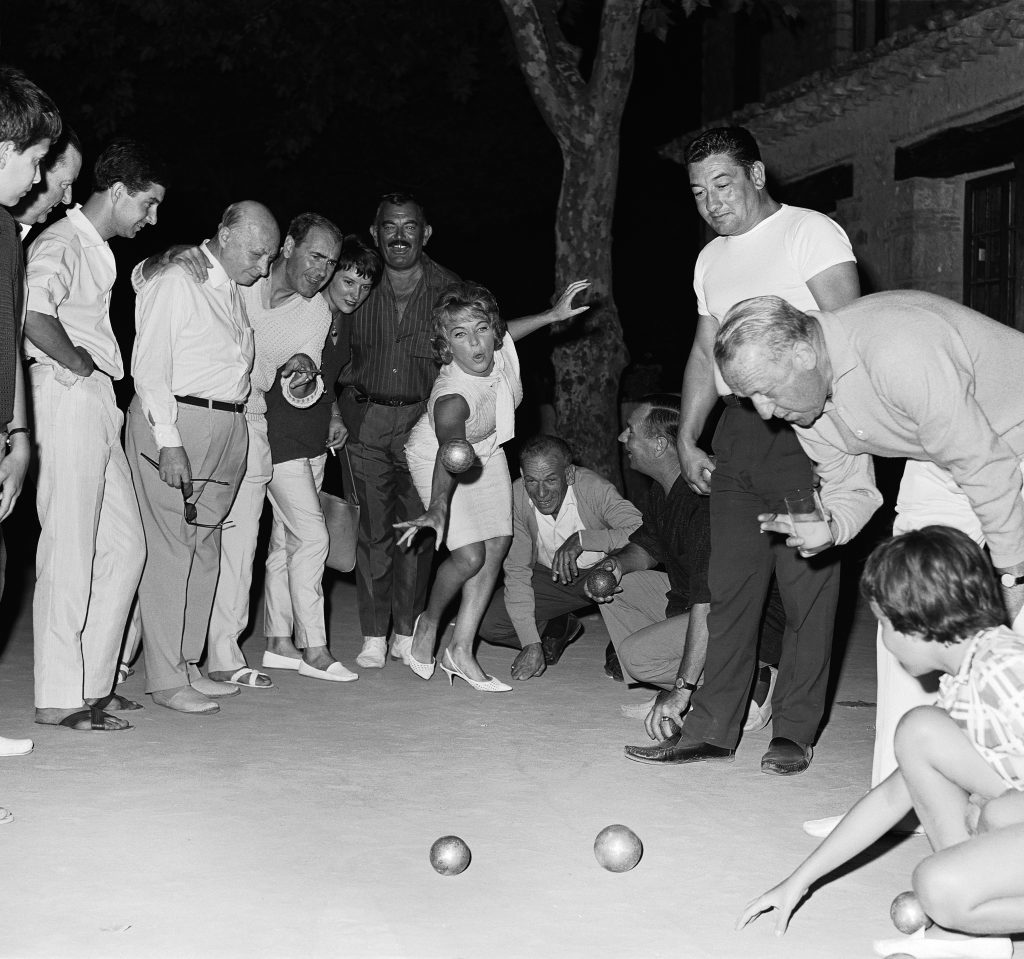 —Saint-Paul was a border stronghold in the Middle Ages (1388) when the County of Nice switched its allegiance from Provence to the County of Savoy. It remained a border town until 1860 when Savoy was annexed to France.

—The village became more accessible in 1911 due to a newly erected tramway between Cagnes-sur-Mer and Vence, via Saint-Paul. Aside from attracting curious visitors, the new method of transportation also made it possible to export

—During the roaring ‘20s, Saint-Paul started to attract what we now know as some of the greatest artists in the world— Paul Signac, Chaïm Soutine, and Raoul Dufy were among the artisans at the forefront. Captivated by the rich array of colors and natural lighting, the tranquil village was their muse.

—While the Côte d’Azur  has long been associated as a playground for the rich and famous, Saint-Paul-de-Vence was on their radar, too. The paradisiacal village has attracted the likes of an array of notable personalities, to include Ernest Hemingway, Zelda and F Scott Fitzgerald, Yves Montand, Simone Signoret, James Baldwin, Marc Chagall, Charlie Chaplin, Vittorio de Sica, Curt Jurgens, Orson Welles, Line Renaud, Liza Minnelli, Kirk Douglas, Gene Wilder, and Michael Caine, to name a few.

—When you’re walking on the beautiful Provencal-style cobblestone streets, take note that they were barren until the ‘50s when Mayor Marius Issert turned the streets into what you can see today. Also interesting, the very first cobbles were brought back from the beach at Cagnes sur Mer. 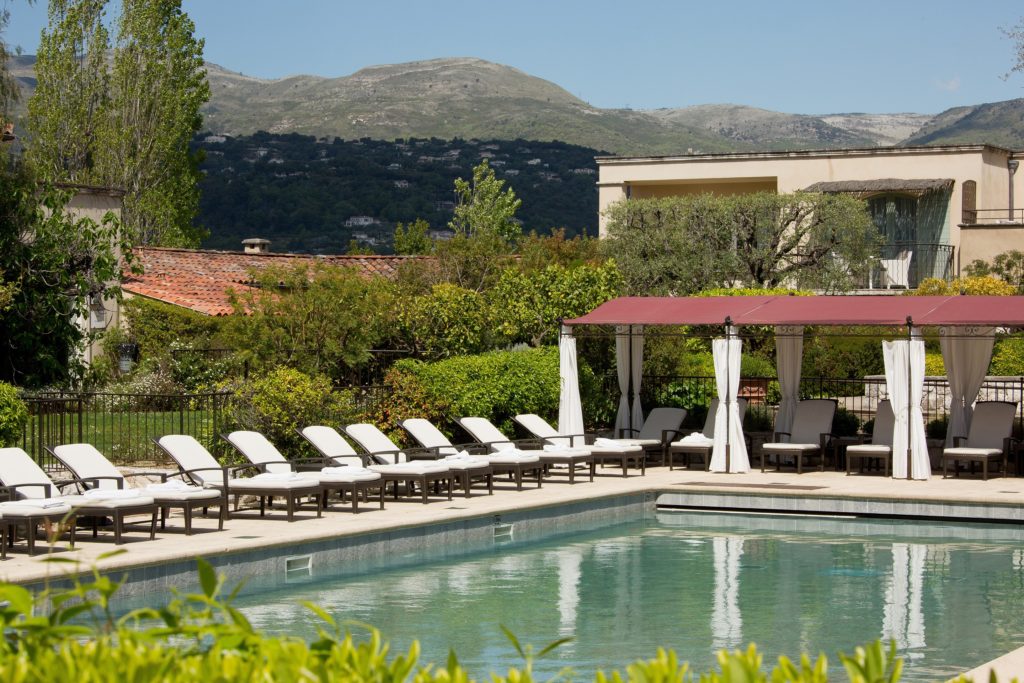 La Colombe d’Or: One can’t discuss lodging options in Saint-Paul-de-Vence without suggesting this historic gem. Back in 1920, the property was known as a cafe and bar called Chez Robinson. In an effort to support his wife Baptistine (Titine), its proprietor—painter/art collector Paul Roux—made additions to the property so that it could facilitate a small three-room inn known as Colombe d’Or. At this time, it served as an artist’s playground for legends such as Picasso and Matisse. Their work, along with pieces from several other greats, still resides in the hotel today for your viewing pleasure. Over the years, the property became a sought-after retreat for celebrities and A-listers alike. Luckily, the Colombe d’Or of today can accommodate more guests—it boasts 13 rooms and 12 suites to be exact. You’ll find modern-day conveniences such as dry cleaning and room service. Speaking of food, even if you’re not a guest, you’re going to want to eat at the on-site restaurant. The menu features quintessential Provencal-style dishes such as stuffed baby vegetables, baked Provençal tomatoes, and a variety of fresh fish and meat dishes. If you visit in the warm weather months, you’ll be treated to the secret garden-like outdoor terrace.  As of the this post, room rates range between 250 and 430 euros per night depending on room selection and season.

Le Saint Paul: Also conveniently located within the village, this five star property (a previous residence from the 16th century) possesses 16 rooms and terrace suites with sweeping views of the Medieval village and area surroundings. Take a meal out on the sprawling terrace where you can choose from menu items that correspond with the season. It’s worth taking an extra cup of coffee (or glass of wine) to soak up the awe-inspiring environs the French way—by taking your time. As of this post, room rates range between 250 and 630 euros per night depending on room selection and season.

Le Mas de Pierre: I had the pleasure of recently staying at this Eden and let’s just say that I didn’t want to leave! Le Mas de Pierre is a five-star boutique hotel (Relais and Chateaux) that’s located just on the outskirts of town. A mas, to be clear, is defined as a Provençal-style farmhouse, which is exactly what this place feels like on an elevated level. The property is surrounded by spectacular landscape that includes commanding mountains; centuries-old olive trees; and aromatic fig, orange, and lemon trees that dot the hotel grounds. As there are less than 60 rooms (cleverly divided amongst several buildings for the utmost in privacy), the feeling here is more like staying at a private estate than a big hotel. The service is impeccable, the decor is on-point, and I love that every room has a private (and generous) balcony or garden. Flying doves (literally) make their way around the grounds, on-site herb and vegetable gardens provide inspiration for the chef, you can visit the hotel owner’s birds in the exotic garden, and the last greenhouse in this historic area of greenhouses is used to cultivate all the orchids and plants in and out of the hotel. As of this post, room rates range between 215 and 1848 euros per night depending on room selection and season. 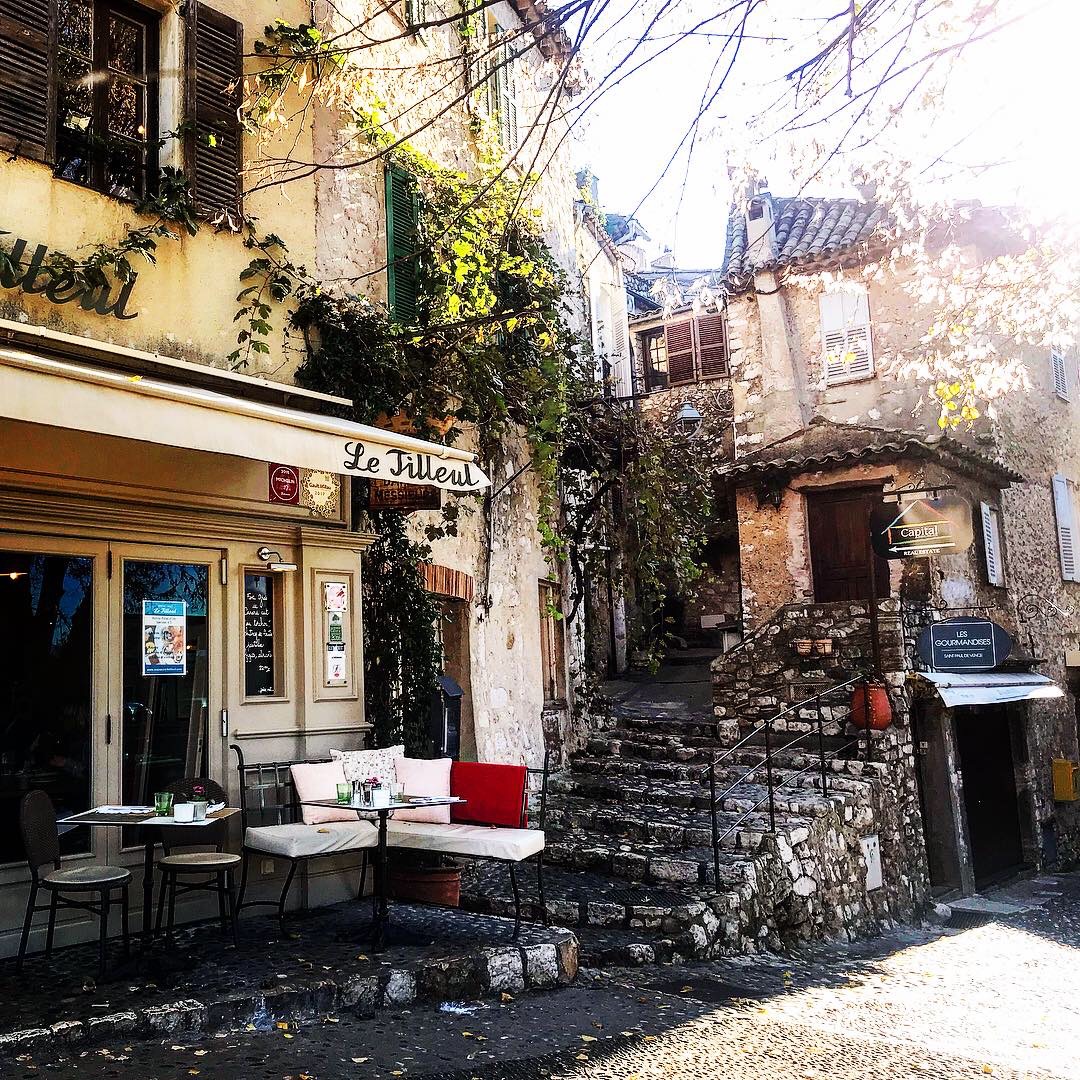 Le Tilleul: Not only is this charming eatery perfectly positioned for people watching and immersing yourself in village life, the food is fantastic. The seasonally changing menu is gastronomic, yet comfortable—you can even find a simple sandwich on the lunch carte if you aren’t in the mood for a feast, but still want to enjoy the views. When I visited with my boyfriend, it was a crisp fall day, but blankets were available at all of the chairs. We used ours (and a bottle of red wine) to keep warm. Along with the complimentary olive tapenade, we shared two of the starters of the day: shrimp with avocado cream (artfully nestled in a small, clear glass) and cured salmon gravlax, which was served with a mini salad lightly tossed in a zesty citrus dressing. For the mains, my S.O. had a filet with nicoise olive mashed potatoes and I opted for the linguini con le vongole—aka linguini with clam sauce. Even though we cleaned each and every plate, we still managed to save room for one of the house-made desserts: a berry coulis and cream trifle.

La Brouette: While this restaurant is not exactly French, the Danish cuisine is as delectable as the owners (and hosts) are charming and hospitable—it wouldn’t be around for 40-plus years otherwise! Specialties include Baltic herring, house-marinated and smoked salmon, smoked trout, and a selection of Danish desserts. During the warm weather months, make a reservation for the rustic, lush patio where you can catch the fireworks on selected nights during the summer. When the chill hits the air, the inside is just as cozy, thanks to a warm burning fireplace.

(See above for information on the restaurant at Colombe d’Or.)

Galerie Frédéric Gollong: This illustrious gallery one of the first art spaces to open in Saint-Paul de Vence. Along with works from historic greats such as Matisse, Picasso, Valodon, Alechinsky, Braque, and Miró, you’ll also find more contemporary pieces from Van Velde, Wimmer, Berthois-Rigal, and Coignard, to name a few.

Galerie Le Capricorne: A diverse gallery that features a wide array of classic and contemporary works in various styles, to include landscapes, street art, abstract, pop art, and illustrations. You’ll find stunning pieces from great masters like Picasso, Chagall, Matisse, and Braque, as well as contemporary creations from artisans such as Michel Dejos, Isabelle Plante, Sylvia Karle-Marquet, Claude Fauchere, and Christophe Gallard, among several others.

La Maison Godet Parfum: A personal favorite, this perfume house dates back to 1901, and has since then whipped up umpteen fragrances that pay homage to everything from cognac (the family’s first business) to the muses of some of the greatest artists milling around Saint-Paul-de-Vence back in the day. All fragrances are made locally and it’s not uncommon that they contain ingredients found right in the village—like figs from the tree at Colombe d’Or. The current “nose” is the great granddaughter (Sonia) of founder Julien-Joseph Godet. If you’re lucky enough, she’ll be in the shop the day you visit; brace yourself for a real treat.

La Petite Cave de Saint Paul: Housed in a 14th century wine cellar, this cavernous shop offers an array of wines from the region of Provence. Wine and spirit aficionados will appreciate the well-curated selection of Cognac, Calvados, Armagnac, champagne, Bordeaux Grands Crus, and some of the best bottles from Burgundy and the Rhone Valley. 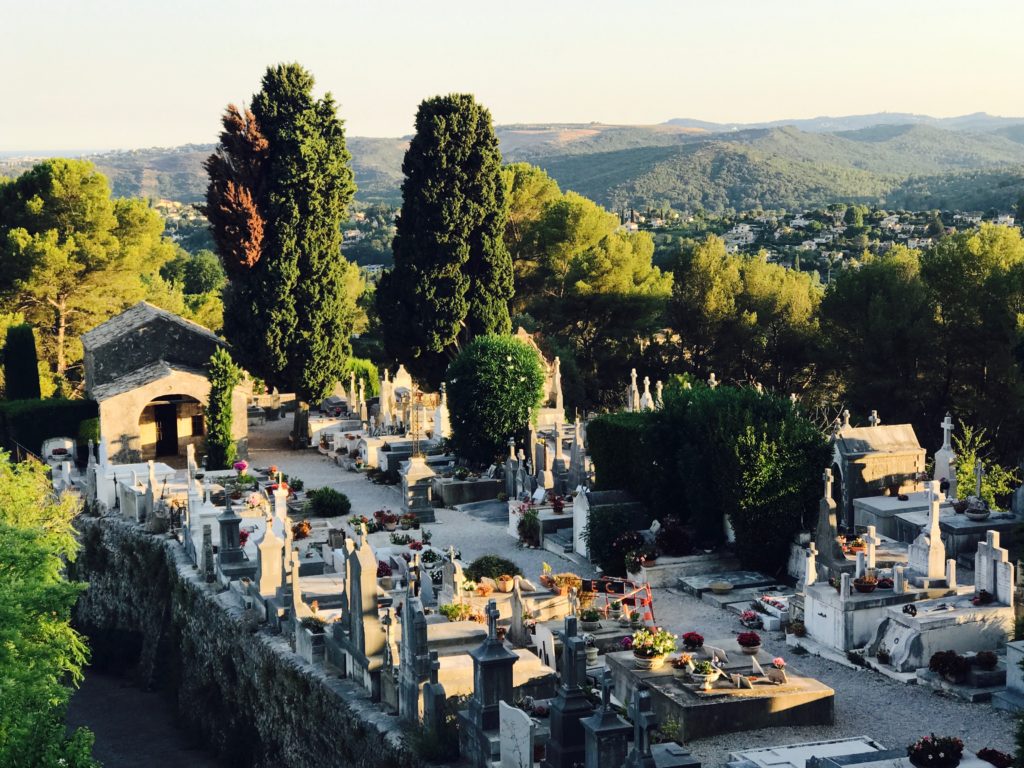 Fondation Maeght: Going on 50-plus years, the Fondation Maeght features the largest and most influential collections of 20th century art in all of Europe.

Musée de Saint-Paul: Take a deeper dive into the artistic history of Saint-Paul by visiting this well-appointed museum that’s housed in a stone house from the 16th century. Exhibitions change regularly and typically feature the works of artists whose works are associated with the village.

Cimetière de Saint-Paul-De-Vence: Dating back to the 16th century, this quaint cimetière is the resting place of famous locals such as Chagall (known for his paintings of the area) and Marguerite et Aimé Maeght, art gallery owners and dealers who lost their son Bernard at the age of 11—he is also buried here. Fondation Maeght became their project to get through this tragedy.

Jacques Prévert’s House: Ask a local to point you in the direction of French poet and screenwriter Jacques Prévert’s house, an unapologetically charming stone abode where he lived with his wife his wife Janine. Prévert was friends with Pablo Picasso and Paul Roux, owner of the Colombe d’Or. 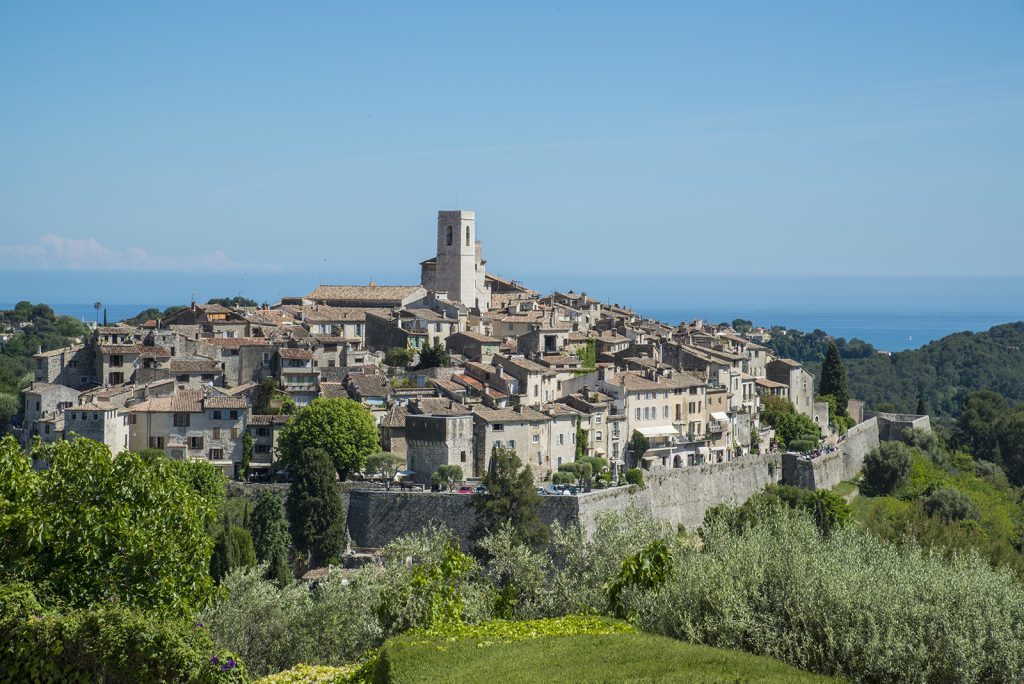 By no means are my suggestions a complete list of what you can eat, do, and, see in Saint-Paul-de-Vence, but they are definitely both personal and popular favorites. Don’t be afraid to visit in the off-season as summer can be overwhelmingly crowded, which makes it difficult to book a table at a restaurant, a room at a hotel, or to full enjoy the shops and sites. Have you ever visited this charming French village? What are your favorite places?