At Maison Francis Kurkdjian With The Master Perfumer Himself 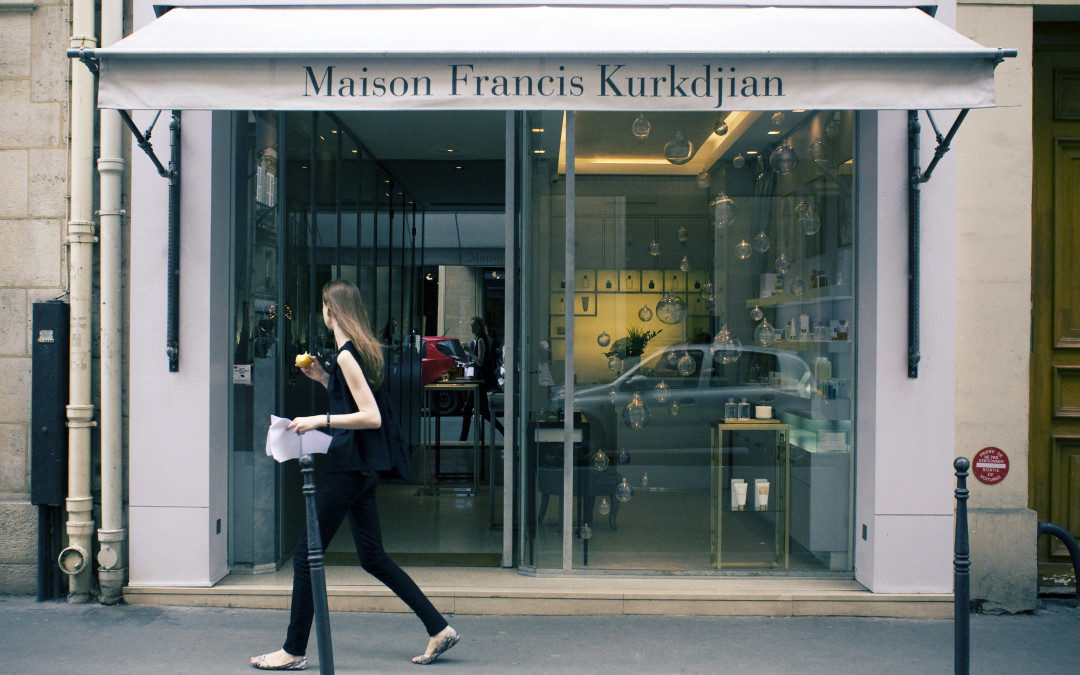 When I attended the Bal Magique du Maroc for the Woman’s Board of The Alliance Française de Chicago back in 2012, I had no idea that years later I’d be chatting with award-winning perfumer Francis Kurkdjian at his Fragrance Maison in the Marais arrondissement in Paris. Not only was he in attendance at the ball, but he created an orange-filled tile fountain that permeated the dance floor with an exotic scent created especially for the fête. Such installations are part of what makes Kurkdjian such an olfactive genius. In fact, he was honored with the Chevalier des Arts et des Lettres by the French Government in 2008.

Perhaps even more familiar to the average consumer, however, would be Kurkdjian’s scented imprint on the mainstream fragrance world: Starting at the tender age of 25, the perfumer was responsible for formulating such iconic scents as Le Male for Jean-Paul Gaultier, My Burberry and Narciso Rodriguez For Her, among others.

In 2001, he also made a name for himself by becoming the first perfumer to open a bespoke custom fragrance workshop. Eight years later, he founded his eponymous House of Perfume, where this interview took place. I sat next to the Versace-clad Frenchman, among all of his ambrosial creations, thankful that I opted to spritz on a little perfume before I left the door that morning. 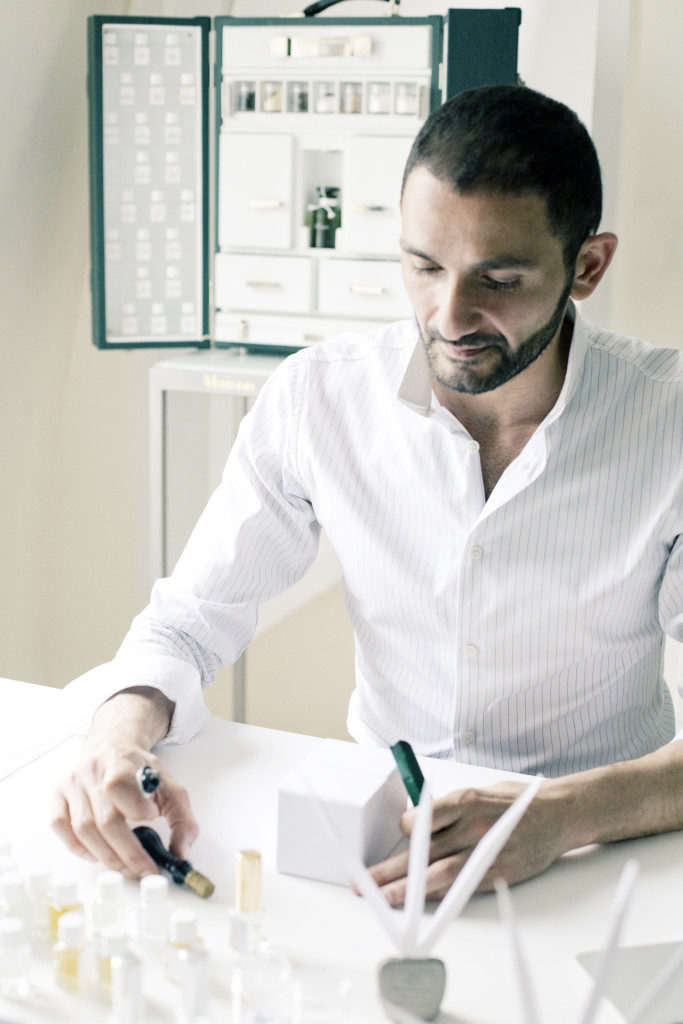 Just two years out of college you developed Le Male, one of the world’s most popular fragrances, with 40-plus to follow. Is it safe to say that you’re a natural perfumer? “No, it’s not natural. I always try to push my boundaries of the craft, but there is no secret. At the end of the day, you have to pretend it’s easy because no one wants to feel pain, to see pain. I’m not saying it’s painful to make a fragrance, but it’s all about work.”

What is your creation process like, and what steps do you take for each individual project? “Creating perfume is like writing a book. It’s storytelling. Whether I work for another brand, my brand, or on an installation, what is important is what you have to say and if there is a different way in which you want to say it. So, then when you have the story, making the fragrance is easy.”

“In a way, the inspiration for the story is the most difficult part, as it’s the most intangible part of the process. Otherwise it’s just technique, and technique is work. At some point, everyone can have a good technique, and that’s the difference between the artisan and the artist. You have to be above the technique. You have to master it in such a way that you forget the technique. The technique and the work of the perfumery is the base, and if you don’t have that in mind or if you don’t know how to handle [the technique] then you’ll go nowhere.” 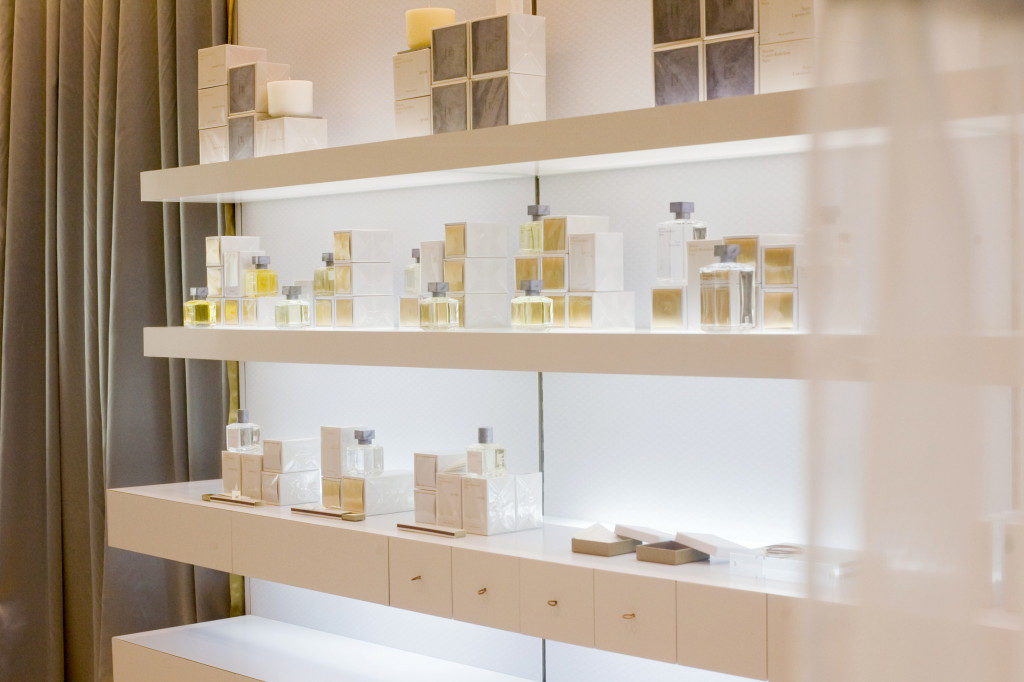 Where do you seek your inspiration? What inspires you? “I would say the world we live in inspires me because we live in the 21st century, which is very important. I don’t like to be nostalgic. I don’t like to be historical about things from the past—even though you have to learn history to be able to understand today, as well as the future, because history is a cyclical process.”

“The idea of building the olfactif wardrobe became perfect in my mind because I felt the way women were wearing fragrance was not adapted to the modern woman. In my mind, modernity for a woman is about the diversity of each woman and being who they really want to be. I couldn’t see myself just thinking about a woman wearing one type of perfume forever. After all, you change your haircolor, makeup and wardrobe, so why not your perfume? In the past, people would have a different fragrance for different activities throughout the day. This is why you need to know the history, because you must think how it can be managed and twisted to our contemporary lives.”

It’s been said that we naturally gravitate toward essential oils that our body or psyche needs at the moment. Would you say that’s the same idea when it comes to choosing a perfume made with essential oils? “No, I think it goes beyond that because a good perfume is when you forget the ingredients. When you hear music, you don’t go to the notes. I play the piano, so I learned all about music for years. But when I listen to music, it’s not about the notes anymore—it’s about the melody. Perfume works exactly the same way.”

“Even though [perfume] can be somewhat straightforward, like my À la rose for example. Of course, you would expect it to have roses, but it’s put together in such in a way that you don’t smell the rose you were expecting. The ingredients have to disappear behind the emotion. This is when you reach the level of an artistic feeling. You forget the music, you forget the notes.” 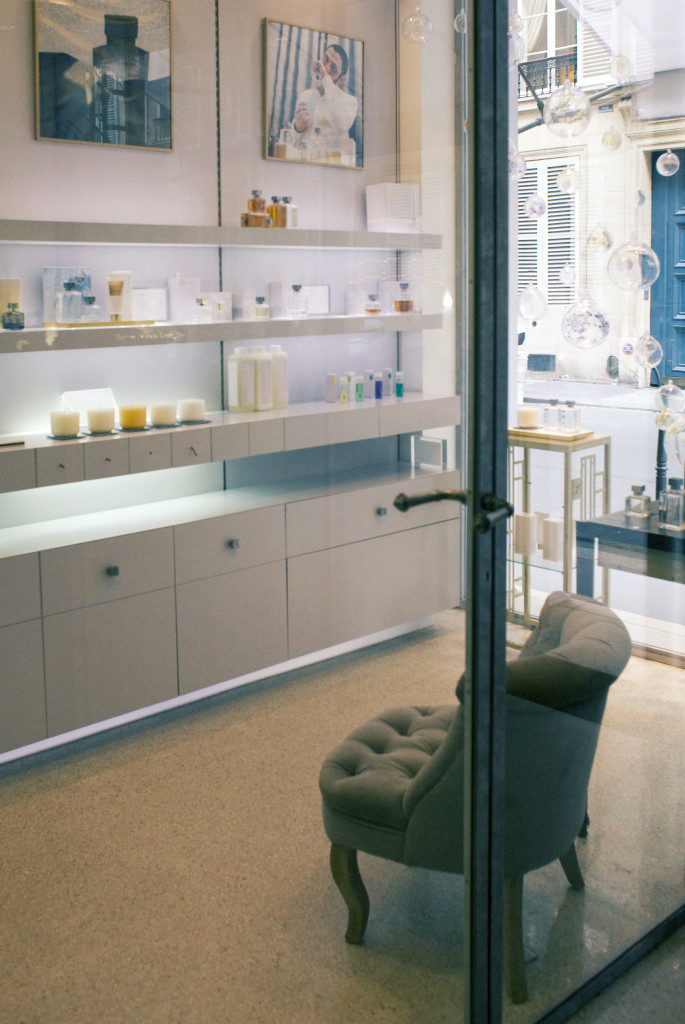 When was the moment that you decided you wanted to branch off on your own? “It took me 10 years to go forward. The first step was when I opened my bespoke fragrances atelier in 2001. The Maison opened in 2009, so it took several years. You have to find the right partner, and have the right people around you. (Editor’s note: Kurkdjian’s business partner is Marc Chaya, a former partner at Ernst & Young.) It’s a question of timing, in my mind. And you can’t rush—it’s never a good idea to rush. I like speed a lot, but sometimes you have to wait a little bit. It’s worth it.”

I know that you are involved in a lot of collaborations. How did you get involved in the installation on the Champs-Élysées in connection with your À la rose fragrance? “I created the perfume À la rose in 2014/2015 for the U.S. and Europe, and a year before in Japan, where it was awarded Best Fragrance at the 2015 Japan Fragrance Foundation awards. I was inspired by a painting called Marie-Antoinette dit à la Rose (Marie-Antoinette with the Rose), which you can see on display at the Champs-Elysées entrance of the Vigée Le Brun exhibition.”

“The portrait is of Antoinette holding a rose in her hand—the same type of rose that I use today in my perfumes. The story behind the painting is fascinating: The original was a scandal because Antoinette was not painted as a queen, but as a bourjois, nonchalant woman. This was done because she wanted to gain popularity with the people of France at the time, but they wound up being shocked instead.”

“So, they had to redo a second portrait in the same pose dressed in her proper attire, etc. I thought the subject behind the painting was very modern, and it showed me that if a subject was modern, the idea of playing around with the name rose—which seems a little bit old fashioned—was relevant at the time. Once the museum heard that my fragrance was inspired by that painting, they asked me to create an installation for the opening of the exhibit.”

I was curious to know a little bit more about the room deodorizing papers that you created. “It’s an old idea from the 19th century that was very popular. Before paper it was ribbon. It was called Ribbon des Bruges from Belgium—fabric was less expensive than paper at the time. My papers are more modern due to the packaging and the scent, which incorporates some of the fragrances in the House.”

What are you currently working on? “We are preparing a huge collaboration with Baccarat for early next year. Something rather huge is coming up at the Musée National d’Art Moderne in early February. We are also scent-designing a couple of hotels around the world—Cannes, the Caribbean…”

How long does scent development take? “I could write down a formula and create a fragrance in 20-minutes. Time doesn’t mean anything to me anymore because I’ve been formulating for 20 years. When I first started, it may have taken me eight months. People love timing things—numbers are important to people because it’s tangible. But creation is totally invisible.” 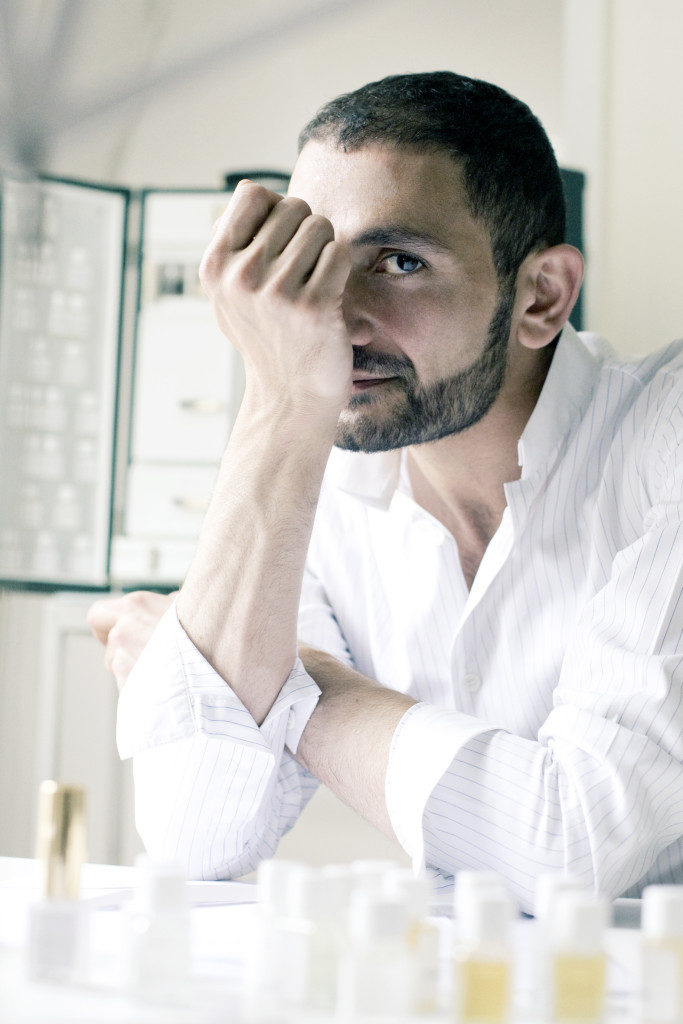 What do you always have in your carry-on when you travel? “I always have a cashmere blanket, laptop, passport, maybe my two cellphones and a charger, keys to come home, and one of my scented leather cards, which scents my personally designed leather bag. We’re launching fragrance-enhanced leather accessories. It’s a technique that was used 800 years ago to scent the leather, but I modernized it by making a wallet, coin purses and things like that. The scent lasts two-to-three years.”

What is one of your favorite travel destinations, and what is on your bucket list? “Anywhere can be super-exciting. It just depends on what you do and who you are with. A journey can be boring if you are bored yourself. It’s more a question of your energy. I’ve seen many wonderful things, I’m very blessed, but what is on my list? As far as the United States isconcerned, I would love to see Niagara Falls and the Grand Canyon. Otherwise, I think it would be more like a journey in time. To go forward 100 years to see what we do with all the mess we are living with now, to see what all this is going to come to. To see how perfume would be. That would be amazing.”